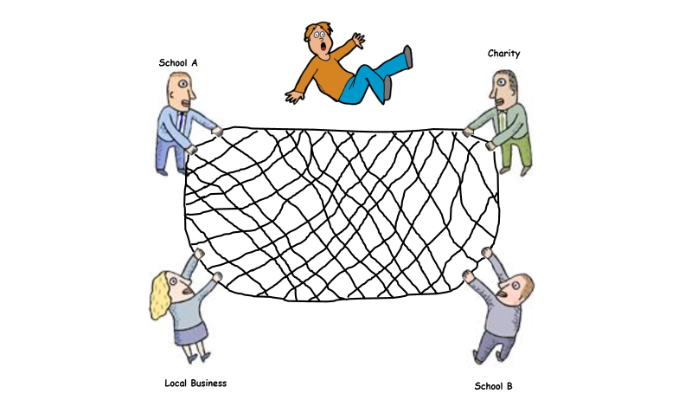 If you follow me on twitter where I opine regularly as @MidlandsSBM, then you have probably realised that I believe in the power of collaboration. It’s a passion of mine and why I enjoy working in/for/with multiple different organisations.

I work for charities, schools, social enterprises & also, on occasion, big business; but the thing they all have in common (apart from me making the occasional nuisance of myself) is that they have mutual support and dialogue as a core business philosophy.

It’s this philosophy which is vital in education, indeed in society. No one organisation can do it alone. We live and work in a rhizomatic (interconnected) world. Connections are vital. Not just between schs but between schs, business, public and third sector. That way the connections become both a safety net that flexes through good times and bad to support individual pupils, families and communities but also a trampoline that magnifies the outcome when pupils make an effort.

Of course, there will be those who say we should take the safety net away, lest it becomes a hammock – a permanent feature whereby individuals become over dependent on support from the welfare state, ‘big society’, or philanthropic support etc. And this is a risk but let’s not forget that, in schools, we are dealing with children.
Children are supposed to be able to look to adults and to society for support as they grow and mature. We are not supposed to cast them adrift or cut off support.

“the trampoline effect is important”

That’s why the trampoline effect is so important. The formal and informal connections between schools, charities, employers and other public services matter. Not only do they stop pupils falling through the gaps but they can launch pupils on the right trajectory.
With the right provocation, the ‘societal trampoline’ can propel disadvantaged pupils to greatness on the back of a good education, or propel them into industry as skilled entrepreneurs. Flexible support from multiple organisations and adults in a position of responsibility can help pupils be anything they want to be.

I use the term ‘provocation’ to describe the need to get pupils moving. Without movement, the trampoline does indeed become a hammock. It takes the effort of an initial jump to feel the benefit of the trampoline’s bounce. We have to get pupils moving for them to benefit; moving intellectually, moving emotionally, moving physically. Some pupils join our schools motivated and ready to ‘bounce off’ all we have to teach them. Others need gentle encouragement to look beyond their social situation and to realise that the ‘trampoline’ can take them to previously unimagined heights.

No one organisation can meet the needs of all its children in this way. This is why, schools and wider society working together for the common good is not just an answer – it is THE answer.