A survey I undertook into the interaction between school business leaders and their governing body has shed light on how few SBLs work with their governors to monitor standards and outcomes for pupils.

Worryingly, a significant number of SBLs reported ‘irregular practices’ in their school or academy trust ranging from

Some time ago, I conducted a small scale survey of school business leaders in the West Midlands as part of a training event I was running on “Effective Governance in Tough Times”.

The results of the survey showed just 15% of senior school finance personnel regularly attend their schools equivalent of the curriculum and standards committee. 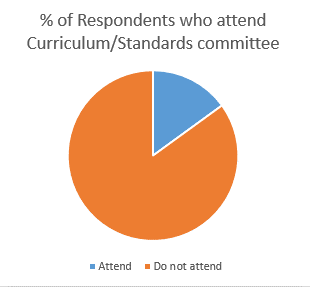 This means that 85% of the school business leaders surveyed do not attend governing body strategic discussions about how well the school/trust is performing for pupils,

This begs the question how effective are schools at making explicit links between the money they spend and the outcomes for pupils? Is it possible to set or monitor, much less evaluate an education budget without reference to pupil outcomes? 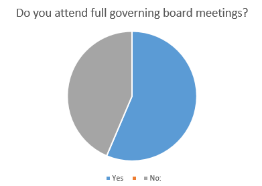 The data relating to full governing body (FGB) meetings  confirms this worrying trend. My survey showed 43% of respondents are not present when their full governing body.   This suggests that a significant number of West Midlands schools do not have the benefit of a trained school business management professional being on hand to advise them during their deliberations and discussions.

This is far from ideal and exemplifies the concerns expressed by Theodore Agnew, a minister in the Department for Education. Agnew, speaking at the initial training event for the DfE/ISBL School Efficiency advisors, noted the importance of the senior finance professional in a school or academy trust having unfiltered access to the Chair and the Board. The minister was adamant that the Chief Financial Officer or, where things have gone wrong, a School Efficiency Advisor, must be able to “have face to face time with the Chair of the Board”.

Depends whether CFO can actually have authority regarding finance. They need a direct reporting line to trustees if AO isn’t taking advice

We can take considerable comfort from the survey finding that 100% of the senior financial officers I surveyed do interact with governors though the finance sub-committee, it is genuinely disappointing to find they are absent from the  majority of FGB meetings. 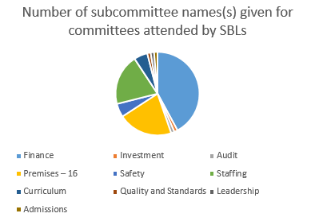 The survey highlighted a number of different committee structures through which SBLs advise governors. It would be interesting to study the nature and quality of these interactions in a further study.

In addition, further investigation of the 57% of schools where the SBM attends the governing body is warranted. I can’t help but wonder if the 53% of SBLs/SBMs who do attend, do so because they are the default clerk to governors and are, in fact, and attending in that role?

Whilst we are considering the effectiveness of advice & guidance given to governors, it is worth noting that the sample in my survey revealed that 40% of governing bodies didn’t have access to the advice and support of an independent Clerk. 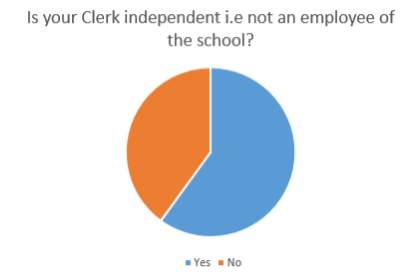 In response to the question “Do you have to send your governing body reports to the Head/Principal for approval”, 64% of respondents said that they did. Two thirds of the reports, risk assessments and recommendations produced by business managers in school in the West Midlands MUST go to the Head before they go to the governing body. 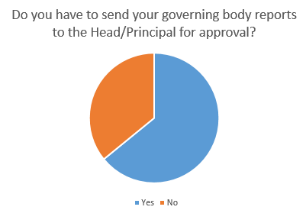 Whilst this may be nothing more than diligent Head Teachers ensuring they are fully briefed prior to meetings, in the context of some of the concerns reported below, this might be a sign of something more worrying; the ‘tidying up/removal’ of bad news. 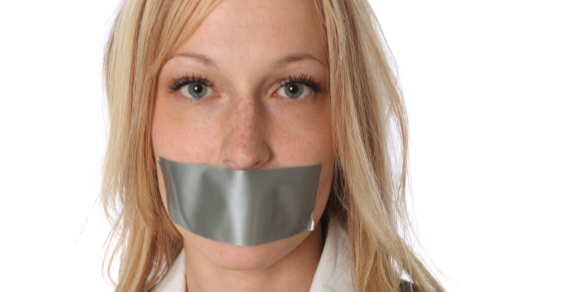 This brings me on to my final pie chart from the survey results – one which shows the answers to a very simple question; ‘are there any irregular practices occurring at your schools? 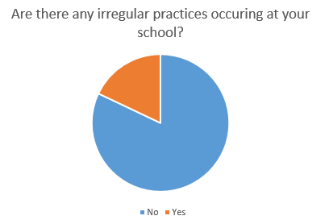 18% of respondents indicated there were practices in their school / setting which concerned them. Scaled up, this would implicate one in five schools nationally; some 4,300 schools, settings and academy trusts. A worrying figure given the importance of running our public sector bodies in a legally compliant way which adheres to the Nolan principles.

Of course, my simple survey didn’t seek to explore the nature of the irregularities – not every trust has an embezzling leader or a string of related-party transactions. In fact, what was disclosed was relatively mundane:

“I feel that staff don’t really know what goes on in GB meetings – there is little, if any, feedback. This also applies to the wider school community”

“Staff / agencies paid from school fund for out of hours learning work. Employees appointed via ‘back door’”

“No governing body – management board members are sponsor employees”

“HT tells governors what he wants them to hear. They never question anything. Sudden large salary increase of HT just before new pay progression policy is in place. I’m no longer asked to attend finance meeting. External finance firm [name of firm removed] gives the Accounts feedback. He [firm’s rep] finds it strange he is never asked questions”

“wine / beer purchased at Xmas and the end of term”

“told not to give bad news to governors”

“health and safety not taken seriously”

What SBLs say about the relationship with Governors

No really ‘irregular’ practice but I would like to see governing body minutes and agendas (non confidential) shared with staff. SBM consulted re. financial & HR matters only”

“My role is via HT to Govs”

“There is no recognition of the SBM in our school”

“Governors do not question budget reports as much as they should”

“expectation that the SBM understands governance”

“works well at this school. Chair of govs is contactable by email”

“not as strong as it was before academisation”

“SBMs need to work with Heads. Appoint Governor as mentor if this relationship fails”

“great relationship between SBM and governors”

The survey was small in scale, with fewer than 100 schools providing feedback. However, it has raised some interesting issues and I look forward to undertaking more research into this crucial area. As Stephen Morales, CEO of the Institute of School Business Leadership says,

“for schools to really work well, the three pillars of school leadership need to be in place; pedagogy, governance and finance. Take one way, and the whole thing falls over.”

It is my view that all governing bodies and trust boards should be actively encouraged to ensure their CFO, SBL or SBM is always invited along to give advice and guidance.

What do you think?